Title: Star Wars The Clone Wars: Republic Heroes
Publisher: LucasArts
Platform: Xbox 360
Genre: Action Adventure
Release Date: 10/5/2009
Overview:
You’d better hope the Force is with you! The Republic is in peril and the Jedi need your help. Become the hero the Republic is looking for in this game that lets you join the Clone Wars. Fight for the Galactic Republic on 30 missions in a brand-new storyline set between the first and second seasons of the hit TV series Star Wars: The Clone Wars. Gameplay unfolds in the same groundbreaking animation style as the show. Wield your lightsaber as a Jedi or blast away as a Clone trooper as you chase down bounty hunters, fight the Skakoan super-villain Kul Teska, and more. 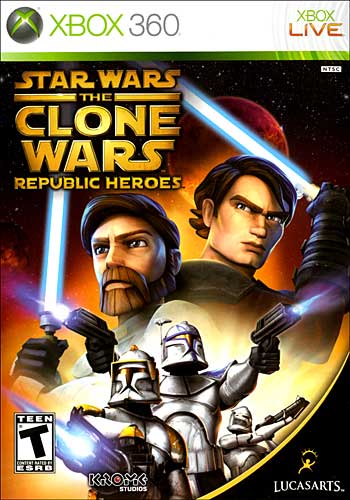