Title: Viking: Battle for Asgard
Publisher: Sega
Platform: PS3
Genre: Action Adventure
Release Date: 3/26/2008
Overview:
When the goddess Hel – daughter of Loki, the Norse God of Mischief – is banished from Asgard for defying Odin, she seeks to bring about apocalypse by releasing the ancient wolf-god Fenrir. With an army of zombie Viking warriors, she marches on the mortal land of Midgard. Take up the sword of Skarin, the troubled young fighter with unparalleled skill, chosen by the gods to defend the mortal realm. Lead a massive clash of armies of gods and men in a series of battles which will culminate in the salvation or complete destruction of the human race. Explore huge and beautiful Viking lands and earn your comrades’ respect so they fight harder for – and with – you. 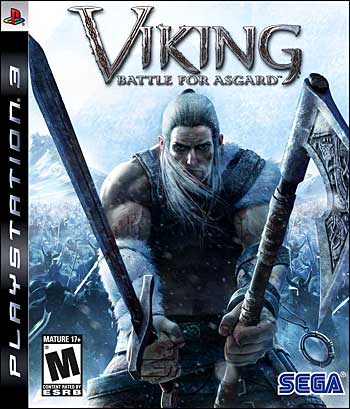