Title: Spider-Man: Friend or Foe
Publisher: Activision
Platform: PlayStation 2
Genre: Action Adventure
Release Date: 10/3/2007
Overview:
Take control of the web-slinging superhero once again as you swing through an original story based on the movie trilogy and the classic comics. Defeat your enemies including Doc Ock, Green Goblin, and Venom. Then, join forces with them and classic side-kicks like Blade and Iron Fist to defeat an unspeakable worldwide evil threat. Swap characters on the fly to use different powers and unleash massive team combos. Drop in and play co-op allows friends to join in whenever they like and take over for your other character. Unlock battle arenas as you progress through the story to have massive one-on-one brawls with anyone on the roster! 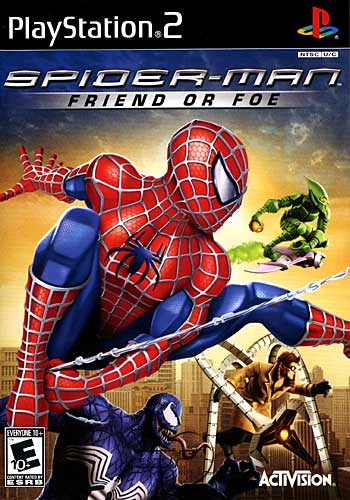