Title: Overlord: Minions
Publisher: Codemasters
Platform: Nintendo DS
Genre: Action Adventure
Release Date: 6/23/2009
Overview:
The Overlord has taken over a new realm and he’s brought his best minions to help with the job! After dispatching his minions to cause trouble on consoles, the Overlord turns his attention to the DS. With a new Cult enemy threatening his powers, the Overlord has sent four of his minions to deal with the problem. Wield the Stylus like a despotic wand and command your minions to do your bidding in an over-the-top cartoon fantasy world. Tell your minions to work as a team or figure it out on their own as they solve puzzles, do battle, and promote general mischief and mayhem. 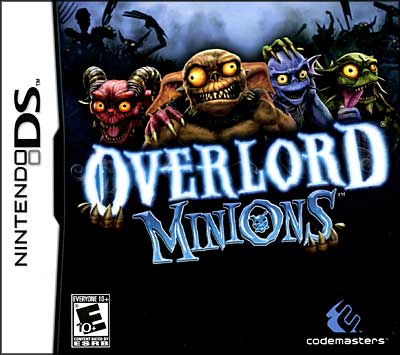