Title: Night at the Museum: Battle of the Smithsonian
Publisher: Majesco
Platform: Xbox 360
Genre: Action Adventure
Release Date: 5/8/2009
Overview:
While the world sleeps, Smithsonian night guard Larry Daley can’t rest, as the museum’s exhibits magically come to life in this game based on the popular film. Equipped only with a flashlight, a keychain, and your own smarts, you’ll navigate 14 levels that take you to some of America’s most historic places, from the Smithsonian Air and Space Museum to the Lincoln Memorial. You’ll meet famous figures like Teddy Roosevelt, ride a T-Rex, blast off in the Lunar Lander, free your captured friends, battle against historical villans, find an ancient tablet, stop an army from taking over the world, and you’ll do it all before dawn. What a night! 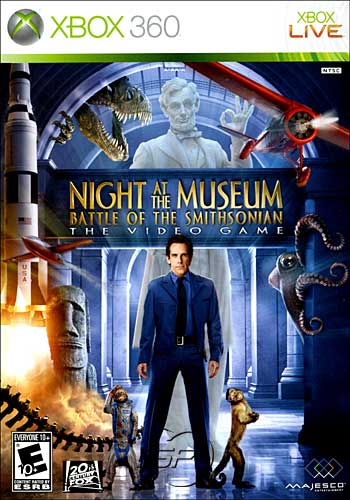