Title: Tork: Prehistoric Punk
Publisher: Ubisoft
Platform: Xbox
Genre: Action Adventure
Release Date: 1/12/2005
Overview:
The evil wizard Orgus has killed Tork’s father and destroyed his village. Now it’s up this young time-traveling, shape-shifting caveboy to defeat Orgus and put history back on track. Tork’s trusty bolas are not his only weapon to fight off dinosaurs and spear-weilding warriors – Tork can also transform into a gigantic Yeti, an armor-plated armadillo, and a dive-bombing flying squirrel when he is in a tight spot. Tork will travel from the Stone Age, through Medieval Times, all the way to the Age of Fantastical Machines in his quest to save his father and stop the evil Orgus. It will take more than avalanches, erupting volcanoes, earthquakes, geysers, landslides, and giant robots to stop this Prehistoric Punk! 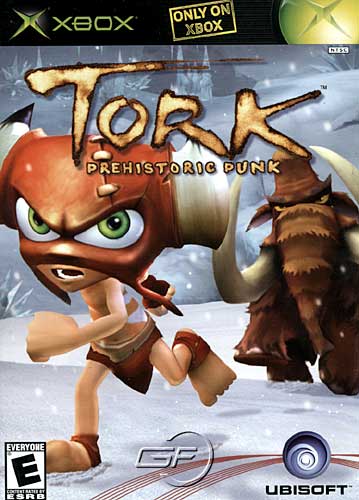