Title: Prince of Persia: The Forgotten Sands
Publisher: Ubisoft
Platform: Wii
Genre: Action Adventure
Release Date: 5/17/2010
Overview:
The Prince’s powers are pushed to the maximum limit as he returns for an all-new adventure. The Forgotten Sands sends the Prince to battle an army that’s ready to annihilate his brother’s kingdom. Pull off ridiculous stunts and fight epic battles as you try and save the kingdom. Run up walls, swing through environments as they fall apart around you, and reach places you probably have no business reaching. With the ability to manipulate nature – like freezing water and crafting climbing rings and pillars out of sand – the acrobatics are bigger and better than ever, even by the Prince’s lofty standards. The Wii version features an exclusive storyline that takes you through environments designed to maximize the acrobatics possible with the Wii’s controls. 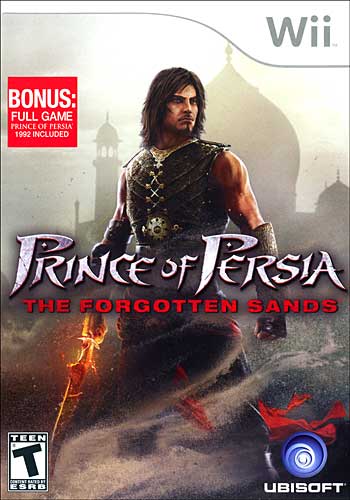