Title: Up
Publisher: THQ
Platform: Xbox 360
Genre: Family/Party
Release Date: 5/23/2009
Overview:
Carl Fredricksen has a dream. He’s dreamed of a life of adventure, of excitement, and of passion! But when he finally embarks on his journey – in a house lifted by helium balloons – he is inadvertantly joined by a young Wilderness Explorer named Russell. Take control of Carl, Russell, the talking dog named Dug, or the exotic prehistoric bird Kevin as you explore the unknown jungles of South America. You’ll trek through dangerous jungles, face terrifying enemies, and discover mysterious secrets of the Amazon. Play through the entire game by yourself, or join with a friend in Co-op Mode. There’s even an epic level that allows up to four players compete in aerial combat! 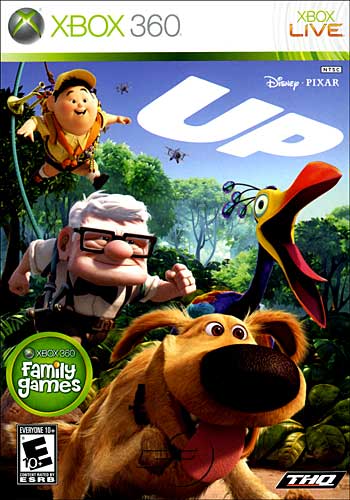