Title: Damnation
Publisher: Codemasters
Platform: Xbox 360
Genre: Shooter
Release Date: 5/28/2009
Overview:
Two rival factions, the Coalition and the Nationalists, fought a bitter 20-year war. Each side emptied every weapon in its arsenal, fighting to a draw and leaving their country ravaged and ripe for the taking. A powerful arms dealer rises from the chaos, destroying what’s left of the two armies and quickly preparing for world domination. With the fate of the world in the balance, humanity must fight back in this epic shooter where the action unfolds not just horizontally, but vertically as well. The battleground is open and sprawling, with landscapes primed for insane vehicular stunts. With frantic combat and attacks from every direction, there’s nowhere to hide. 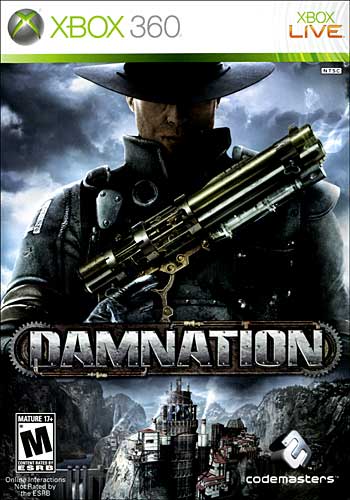