Title: Eat Lead: The Return of Matt Hazard
Publisher: D3P
Platform: Xbox 360
Genre: Shooter
Release Date: 2/28/2009
Overview:
Matt Hazard’s life used to be good. He was an action-game hero in the heyday of action gaming during the ’80s and ’90s. But after a couple of bombs, he decided to call it quits. When a big-time publisher offers him the chance for the limelight yet again, he takes it and re-enters the world. He soon discovers the game he’s supposed to star in is, in fact, meant to do him in! Take control of Matt as you travel through the best action games ever. Battle monsters, zombies, space marines, 2D Nazis, and even Japanese RPG bosses. And utilize a variety of weapons from squirt guns to laser guns in this hilarious shooter! 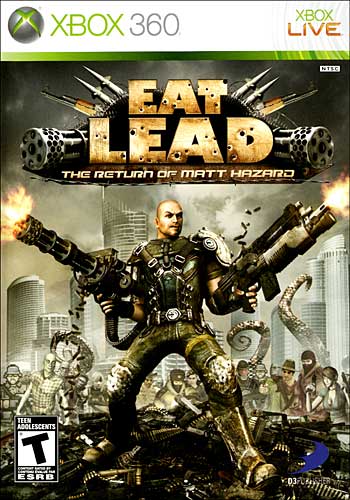