Title: Land of the Dead: Road to Fiddler’s Green
Publisher: Atari
Platform: Xbox
Genre: Shooter
Release Date: 10/26/2005
Overview:
Battle the undead in a fight for your life based on George A. Romero’s zombie flick, Land of the Dead. The founder of Fiddler’s Green, the fortified city housing the last of the living, offers you a special job. An exceptional reward awaits…if you live long enough to cash in. Fight the walking dead in 20 gut-wrenching levels. Lay waste to zombies with weapons including everything from M-16s to Molotov cocktails. The Body Part Specific Damage System produces nasty carnage, while a state of the art Unreal Engine and blood-curdling sound add to the horror. Four modes of intense, eight-player, Xbox Live mayhem include Deathmatch, Capture the Flag, and Invasion. 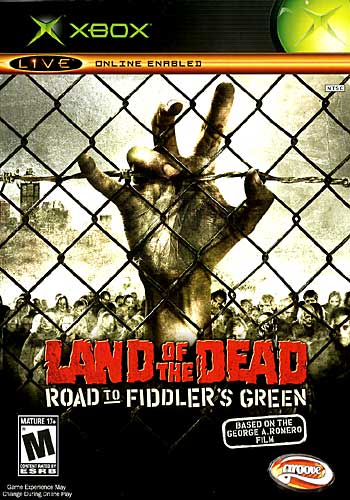