Title: Resident Evil 5
Publisher: Capcom
Platform: Xbox 360
Genre: Action Adventure
Release Date: 3/12/2009
Overview:
Resident Evil writes a chilling new chapter as the Umbrella Corporation’s bioweapons have fallen into the hands of rogue leaders. Play as Chris Redfield in a remote desert colony overrun by a new breed of evil. With hordes of flesh-eating beings ready to make you their next snack, escape may be the best way to survive. Environments play an increased role, with horrors possibly lurking in every alcove or behind every shadow. New lighting effects will make you wonder – was that movement, or just an illusion? Good thing you’re not alone. A new focus on co-op play teams you with a zombie-destroying sidekick Sheva, who changes the way RE is played. 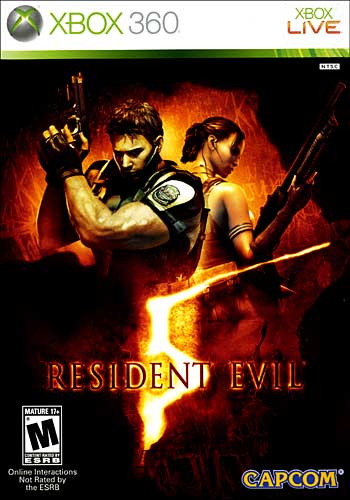