Title: Lord of the Rings: Conquest
Publisher: Electronic Arts
Platform: Xbox 360
Genre: Action Adventure
Release Date: 1/15/2009
Overview:
The battle for Middle Earth is yours to win or lose in this game that puts you in the action-packed center of the Lord of the Rings saga. Fight on both sides of the struggle for the One Ring in two distinct campaigns. One follows the LOTR storyline, the other (for the first time) unfolds as if Sauron had regained control of Gollum’s precious. Control characters and creatures from the films, including Oliphants, Cave-trolls, the Balrog, members of the Fellowship, and even Sauron himself. Experience epic LOTR locations in massive battles with up to 150 on-screen characters. Local and online multiplayer add co-op and versus options for 4-16 players. 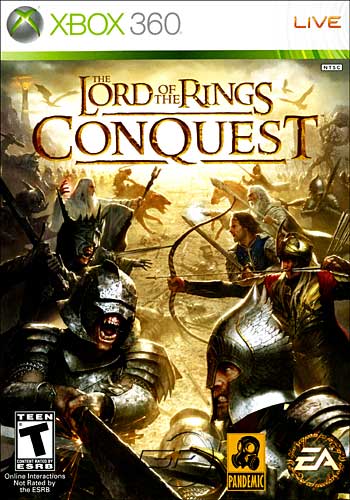