Title: Turning Point: Fall of Liberty
Publisher: Codemasters
Platform: PS3
Genre: Shooter
Release Date: 2/29/2008
Overview:
Fight the battle after the ultimate ‘what if?’ in this game that thrusts you into a world where the Nazis have won World War II. Turning Point: Fall of Liberty turns history on its head, creating a fictional conquered America, and you’re caught right in the middle of it. You’re Dan Carson, a Big Apple construction worker who witnesses the Nazi invasion of New York from his work site high above the city. As paratroopers descend, zeppelins loom, boats land, and the Nazis swarm, Dan must find a way to survive with whatever he can find. Join the American resistance and experience World War II from a whole new perspective. 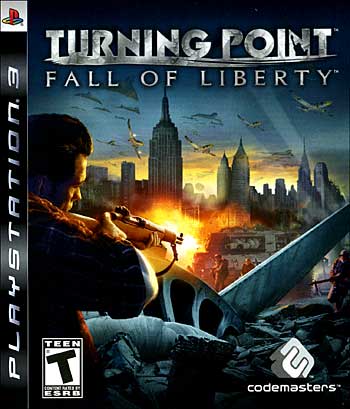