Title: Resistance 2
Publisher: Sony Computer Entertainment
Platform: PS3
Genre: Shooter
Release Date: 11/5/2008
Overview:
When an unstoppable force seems determined to destroy mankind, what can humanity do but keep fighting? Step back into the boots of Nathan Hale as you battle, not only the seemingly impossible Chimera, but the Chimera disease coursing through your body. Explore the alternate 1953 American landscape. Bring familiar weapons and a cache of new ones to bear against an undaunted enemy. First, play through the full-length single-player campaign. Next join up with seven others online for an unprecedented class-based eight-player co-op campaign with a separate, parallel story line. Then take on up to 60 players in massive online battles with a squad-based focus to balance the game and encourage rivalries! 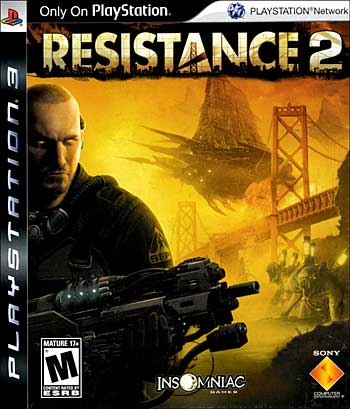