Title: Grand Theft Auto IV
Publisher: Take Two
Platform: PS3
Genre: Action Adventure
Release Date: 4/28/2008
Overview:
Return to the world of GTA, but this time experience it in all its next-gen glory! Cruise the streets of an exquisitely detailed Liberty City, based on modern-day New York, and perform classic GTA-style missions. Jack cars from unsuspecting drivers or break windows on parked cars to avoid dealing with angry pedestrians, then use the all-new GPS to get where you’re going. Stock up on weapons like the rocket launcher, or toss grenades to dispatch roomfuls of enemies. Buildings are now accessible, allowing you to head to the roof to get a better vantage point. And in a GTA console first, you can now speed through Liberty City online and compete against 15 other players in over a dozen modes! 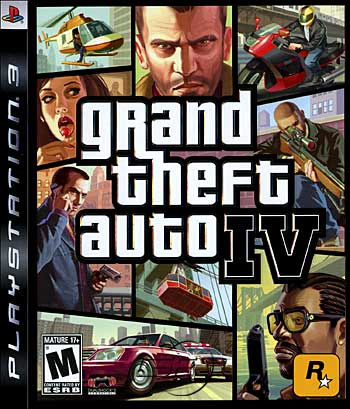