Title: Transformers: War for Cybertron – Decepticons
Publisher: Activision
Platform: Nintendo DS
Genre: Action Adventure
Release Date: 6/21/2010
Overview:
Before they battled on Earth, the Autobots and Decepticons fought a battle so big it destroyed a planet. Experience the civil war that sparked the Transformer saga in this game that lets you fight the battle for Cybertron. Join your favorite Decepticon characters and fight as the ultimate weapon, transforming any time between vehicle and robot and hitting your enemies with incredible futuristic firepower. But that’s only the beginning. The DS War for Cybertron spans two games, one for the Decepticons and one for the Autobots. Play both to unlock 30 total playable Transformers, including 11 DS-exclusives, or defeat friends in head-to-head multiplayer to win their characters. 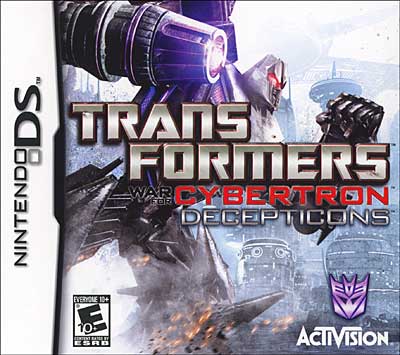