Title: Miami Law
Publisher: Konami
Platform: Nintendo DS
Genre: Action Adventure
Release Date: 6/12/2009
Overview:
When crime is going down in the fairest of South Florida cities, who do you call? Law Martin! He’s a feather-haired, loose-cannon cop on the edge, and he likes to shoot first and ask questions later. He and his partner, a beautiful blonde named Sara Starling, are on a quest to rid the city of its illicit trade. Play through a variety of mini-games, where choosing which character to play will determine which game you take on. You’ll be driving, shooting, running in guns a-blazing, and even hacking into security systems. You’ll also investigate crime scenes, examine evidence, and follow a twisting storyline all the way to its conspiratorial end! 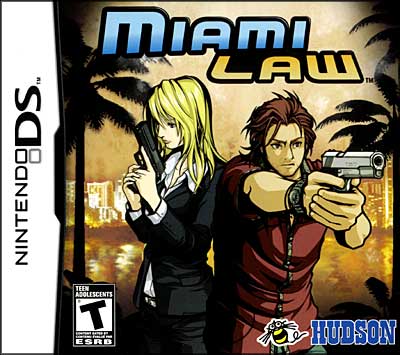