Title: Saboteur
Publisher: Electronic Arts
Platform: Xbox 360
Genre: Action Adventure
Release Date: 12/7/2009
Overview:
When rough-and-tumble Irish mechanic Sean Devlin visits Paris, it isn’t the sights he’s after. He’s come to pick a fight. The Nazis have no idea what’s about to hit them in this stylized, open-world WW2 action saga. Slip into the seedy 1940s Parisian underground and swagger your way to revenge as a hero who’s bold, brash, and truly excited about blowing things up. Work with the Resistance to undermine the Nazi efforts. Derail trains, implode buildings, and fight through occupied territory as if it were a barroom brawl on a grand scale. Just try not to get captured or shot; it really hurts your ability to enjoy the nightlife! 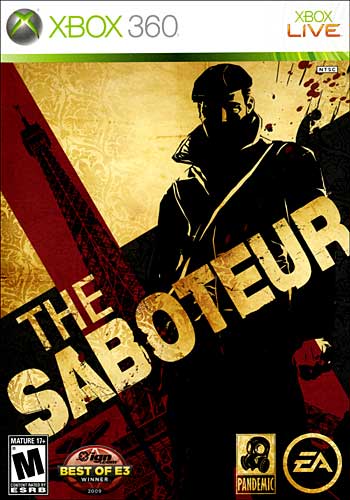