Title: WWE SmackDown vs. Raw 2009
Publisher: THQ
Platform: Xbox 360
Genre: Fighting
Release Date: 11/8/2008
Overview:
Getting to the top of the WWE mountain isn’t easy. Now, you don’t have to go it alone thanks to the franchise’s first ever co-op storyline in SmackDown vs. Raw 2009. The all-new Road to Wrestlemania co-op Story Mode highlights the additions to the definitive WWE gaming experience. Partner up again in new Tag Team Explosion matches where you’ll build momentum as a team, finish opponents with devastating combos, then take your act online and fight for supremacy against anyone in the country. Customizable Superstars get even better with the new Create-A-Finisher, which lets you concoct your own way to close out your opponent. There are also new stars, added realism, and much more. 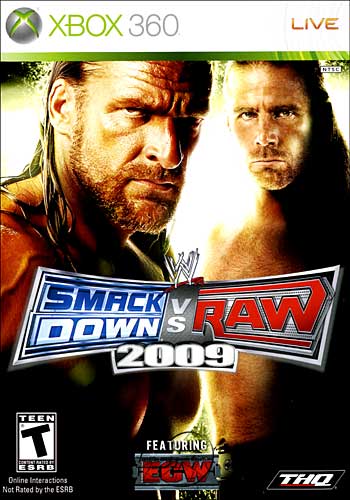