Title: SoulCalibur IV
Publisher: Namco
Platform: PS3
Genre: Fighting
Release Date: 7/28/2008
Overview:
The search for two mythical swords continues in glorious, next-gen style! Play as all your favorite Soulcalibur characters, each with his or her own abilities, weapons, and style. Revisit classic locations and battle in new ones, including the Ostrheinsburg Castle Throne Room and the Phantom Pavilion. Smash through walls and avoid environmental adversaries. Up against a really defensive opponent? Wear down their defense, then mash all four face buttons for a critical strike, one of many new additions to the deep combat system. Take the game online and challenge anyone, anywhere, in ranked and unranked battles. And hold on to your lightsaber – Darth Vader joins the lineup as the PS3-exclusive fighter! 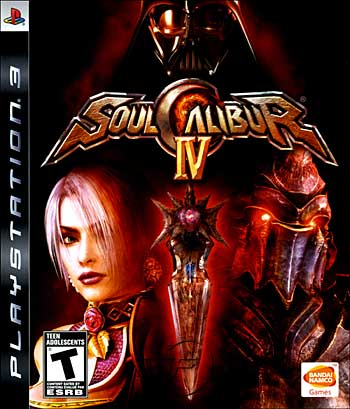