Title: Gauntlet: Seven Sorrows
Publisher: Midway
Platform: Xbox
Genre: Action Adventure
Release Date: 12/13/2005
Overview:
Gauntlet’s four immortal heroes – the Warrior, Wizard, Valkyrie, and Elf – have long served their Emperor well. The Emperor, his thoughts corrupted by a devious advisor, betrays the immortals and has them crucified. The Emperor’s six advisors turn on him. The Emperor returns the heroes to immortality, begging them to stop his power-hungry advisors in this new Gauntlet saga. Seven Sorrows features 15 levels, the chance to choose your character’s weapon and magic skills, two to four player co-op, and, for the first time, the option to explore the realm together online. Gaunlet’s patented pick-up-and-let-‘er-rip hack-and-slash style has been recharged to deliver more of a wallop than ever. 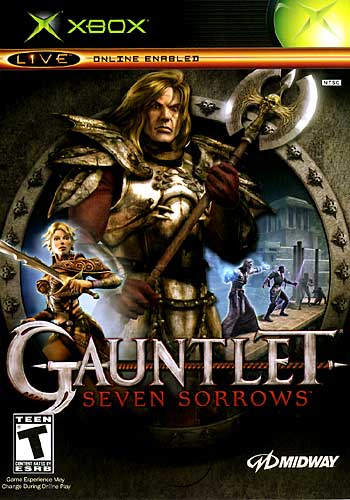