Title: America’s Army: Rise of a Soldier
Publisher: Ubisoft
Platform: Xbox
Genre: Action Adventure
Release Date: 11/17/2005
Overview:
Uncle Sam wants you! Join the fight for freedom in the only combat game developed in conjunction with the United States Army. You’ll start out as a member of an eight-man fire team. With a non-linear campaign design, Rise of a Soldier gives you free reign to pick your career path. Scope out a specific role (like rifleman or sniper) or try many as you rise from fresh-faced grunt to head of an elite Special Forces unit. Actual Special Ops soldiers were consulted to ensure the highest realism in weaponry, equipment, missions, and combat experience. Go online to mold your own soldier in Career Mode or engage in 16-player missions. 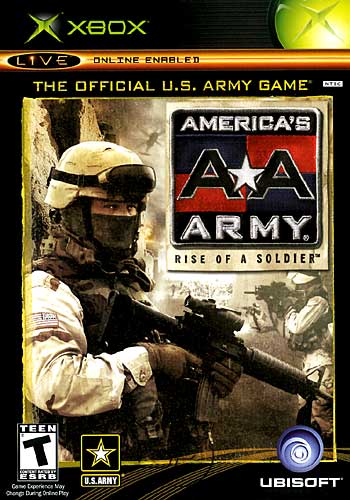