Title: Rock of the Dead
Publisher: UFO Interactive
Platform: Xbox 360
Genre: Shooter
Release Date: 10/27/2010
Overview:
There is a new weapon in the fight against zombies: rock ‘n’ roll! Shred your guitar and bang your drums to survive a zombie attack in this game that mixes the fun of a shooter with the awesomeness of rock music. Play a story-based campaign as you rip off riffs or blast out beats to defeat oncoming zombies. Fight as a co-op duo with two guitars, two drum sets, or one of each. The soundtrack combines hits from hard-rock heroes and metal versions of classical pieces. And, to top it all off, you can geek out with the voice talents of Rob Zombie, Felica Day, and Neil Patrick Harris. 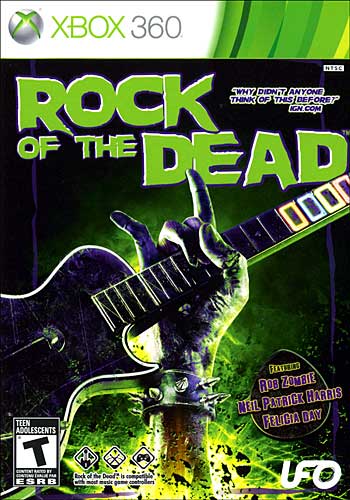