Title: Yu-Gi-Oh! 5D’s Duel Transer
Publisher: Konami
Platform: Wii
Genre: Strategy/Simulation
Release Date: 12/6/2010
Overview:
There is a mystery inside this Yu-Gi-Oh! battle, and the only way to solve it is to win! Yu-Gi-Oh! 5D’s Duel Transer sends you into the world of the Yu-Gi-Oh! 5D’s animated series to do battle against the Duelist Corps on the island of Ragnarok. Who are the members of the Duelist Corps and what are they after? You’ll find out in a completely original storyline centered around the Wii-exclusive Duel of Legend Cup. Play against 20 Yu-Gi-Oh! characters, including some that have never appeared in a video game. In single-player or online two-player, you’ll battle with over 4,500 Yu-Gi-Oh! cards, including November 2010’s Star Strike Blast series. 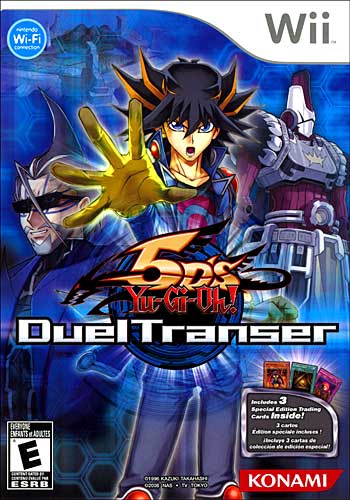