Title: Again
Publisher: Koei
Platform: Nintendo DS
Genre: Action Adventure
Release Date: 4/2/2010
Overview:
Author a thrilling page-turner in this game that turns the DS into an interactive crime story that’s yours to solve. Holding the DS like a book, you’ll turn over clues as you turn the pages, tapping through a twisting storyline filled with video flashbacks. Play as FBI agent Jonathan Weaver, the lone survivor of murderous attack on his family. Nineteen years later, Weaver will not stop until his family’s killer is found. Use Past Vision powers to scan crime scenes for clues, then unlock whatever secrets the evidence holds with Current Vision. Each puzzle you solve brings you one step closer to the killer. 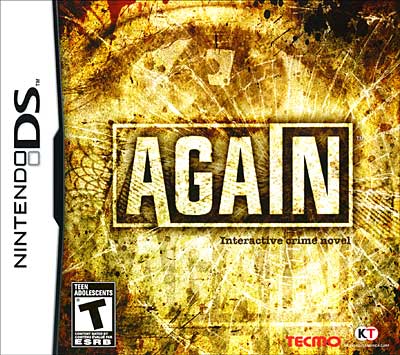