Title: BlazBlue: Calamity Trigger
Publisher: Aksys
Platform: PSP
Genre: Fighting
Release Date: 3/11/2010
Overview:
The creators of Guilty Gear fired off their first hi-res, 2D fighter with BlazBlue: Calamity Trigger, and now the experience fires off on PSP. Travel to the mythical 13th century city of Kagutsuchi, where the chosen few who make up the Librarium regulate a mysterious power known as the Armagus. Fusing magic and technology, the Armagus is capable of amazing things. Evil mastermind Ragna the Bloodedge hopes to use a form of Armagus to destroy the Librarium, setting the stage for an explosive showdown. Choose from 12 fighters, each with their own style. Master all the right moves in multiple game modes, including ad-hoc multiplayer and a PSP-exclusive Legion Mode. 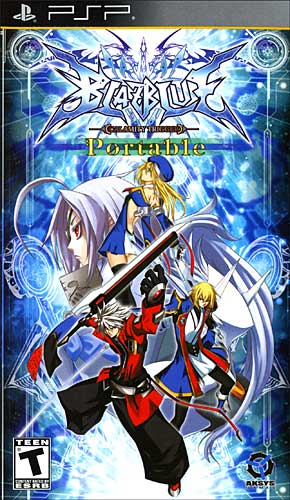