Title: WWE Smackdown vs. Raw 2010
Publisher: THQ
Platform: Xbox 360
Genre: Fighting
Release Date: 10/19/2009
Overview:
It’s your show in Smackdown vs. Raw 2010, which puts you in charge of almost every aspect of the WWE empire. An updated Road to Wrestlemania features the first-ever Divas and Create-a-Superstar storylines. The Create-A-Superstar design tool has been recharged with new options, including the ability to tattoo your fighter. The WWE story designer lets you put together an entire night at the arena, setting match cards, talent, rules, storylines, creating cutscenes, and more. In a franchise first, you can even give your favorite WWE superstars a whole new look. Upload all your creations, from superstars to storylines, to share your vision with the entire WWE universe. 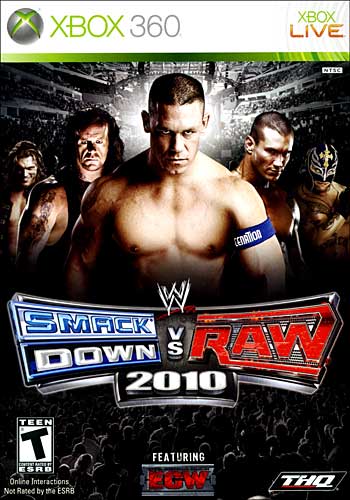