Title: R.U.S.E.
Publisher: Ubisoft
Platform: PS3
Genre: Strategy/Simulation
Release Date: 9/4/2010
Overview:
Mind tops muscle in this real-time war strategy game where outfoxing your enemy is just as important as outgunning them. Become a master of deception in combat where recon, spying, and altering enemy intelligence are the keys to victory. Gather intel, strangle supply lines, and strike where your enemy is weak. Use codes, decoys, camouflage, and other tactics designed to mislead. Command soldiers, vehicles, and aircraft in a single-player campaign, or see if someone calls your bluff in eight-player skill-based skirmishes. Keep an eye on every detail with an exclusive engine that lets you effortlessly zoom in from high overhead and put yourself right in the heart of the battle. 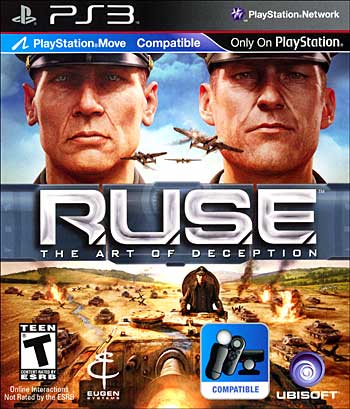