Title: Supreme Commander 2
Publisher: Square Enix
Platform: Xbox 360
Genre: Strategy/Simulation
Release Date: 3/16/2010
Overview:
From the critical decisions that test your resolve to the monstrous war machines that roam the battlefields, there is nothing small about this real-time strategy sequel. Pick your side and lead your forces as commander of The United Earth Federation, Cybran Nation, or the Aeon Illuminate. Whether you play the 18-mission single-player storyline or take the fight online, you will battle on the largest possible scale and watch your decisions play out in real time. Upgrade armies and vehicles with new weapons and tech and send them straight into battle. New rendering technology delivers more explosive combat, while improved UI lets you focus on action and the most important strategy elements. 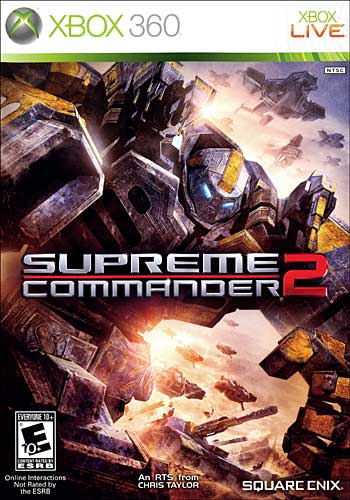