Title: Cabela’s Big Game Hunter 2010
Publisher: Activision
Platform: Xbox 360
Genre: Shooter
Release Date: 9/28/2009
Overview:
Bringing down big game is only half the battle in the most challenging edition of Cabela’s Big Game Hunter yet! This time around, you’re not only chasing the world’s largest trophy animals, you’re chasing Super Hunter status. To get it, you’ll need to cross the world’s most rugged terrain. The animals you’re after can only be reached after you’ve climbed menacing cliffs, crossed raging rivers, and survived the worst nature can throw at you. Once you get there, you’ve still got to finish the hunt. Earn rewards for using cover, line up the perfect shot with the VITALS system, and set your sights on the coveted Super Hunter status. 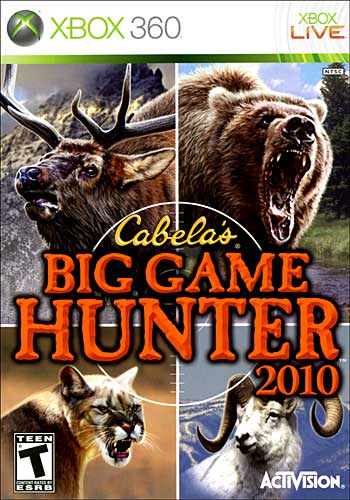