Title: Midnight Club 3: DUB Edition
Publisher: Take Two
Platform: Xbox
Genre: Racing
Release Date: 4/12/2005
Overview:
Rockstar Games has teamed up with DUB Magazine to bring the bling back to the streets in a new version of Midnight Club that looks as good as it drives. Gameplay delivers the insanely quick, open-city racing through the streets (and airspace) of San Diego, Atlanta, and Detroit that fans of the series have come to expect. DUB Magazine, the authority on automotive aesthetics, adds the most complete car customization system ever seen in a video game. Trick out licensed SUVs, muscle cars, import tuners, choppers, and luxury cars from top to bottom with rims, trims, upgrades, and more chrome than oughta be legal. Take on up to 7 friends online and get ready to wreck some righteous looking rides! 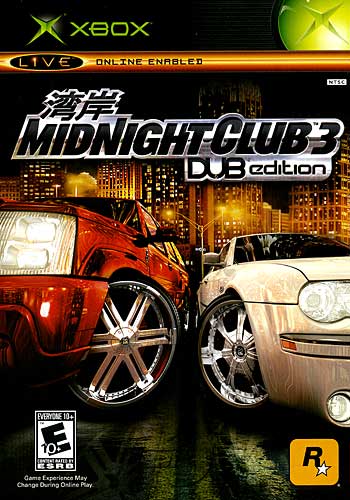