Title: Ben 10: Ultimate Alien Cosmic Destruction
Publisher: D3P
Platform: PlayStation 2
Genre: Action Adventure
Release Date: 10/4/2010
Overview:
Ben has a new toy that makes him more powerful than ever! Use the new Ultimatrix to boost the power of old aliens and harness the skills of new ones in this game based on the third Ben 10 cartoon series. With the Ultimatrix, Ben can turn into more powerful versions of aliens you’ve already seen. You can also play as aliens from the new series, including WaterHazard, Terraspin, AmpFibian, and Armodrillo. Improve the skills of your favorite alien with a new Upgrade System and switch forms faster with the new Quick Switch. Gameplay is more cinematic with new Quick Time events that guide you through boss battles and more. 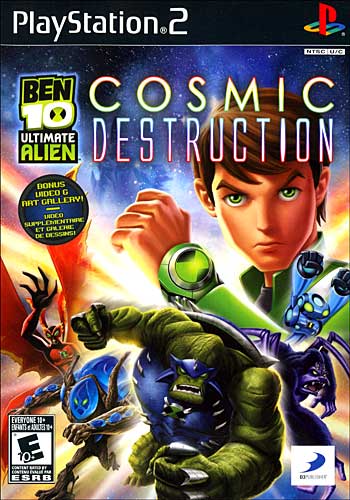