NOTE: Power Gig: Rise of the SixString does not include the Six String Guitar, the AirStrike Air Drums, or the MojoVox Microphone with rental or purchase. The game is playable with Guitar Hero or Rock Band controllers.
Shred like the big boys with this game that lets you strum on six actual strings. In the world of Ohm, music is not allowed. It’s up to you and your band of rock revolutionaries to defeat the evil Headliner, and the only way to win the battle is to really rock. Use Power Gig’s new guitar accessory, which features six strings and gives you the option to play like the real thing. Rock out to tracks from artists including Bad Religion, Paramore, Black Sabbath, and more. Power Gig is also the only place to find songs from three music titans: Eric Clapton, Dave Matthews, and Kid Rock. 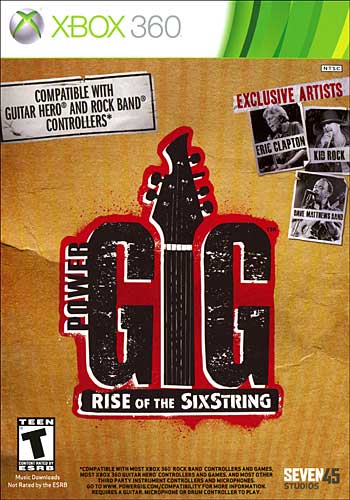