Title: Lord of the Rings: Aragorn’s Quest
Publisher: WB Games
Platform: PS3
Genre: Action Adventure
Release Date: 9/14/2010
Overview:
Take up the sword and become the King of Men in this adventure that lets you live the Lord of the Rings trilogy through the eyes of Aragorn. Experience his greatest quests and most heroic deeds as you begin as Strider, Ranger of the North, and rise to sit on the throne of Gondor. Wield his bow, sword, and spear as you battle the forces of Sauron on foot and on horseback. Fight alongside the Hobbits and other characters from J.R.R. Tolkein’s stories in a family-friendly journey through Middle Earth. A friend can join any time in drop-in/drop-out play where the two of you will battle as Aragorn and Gandalf. 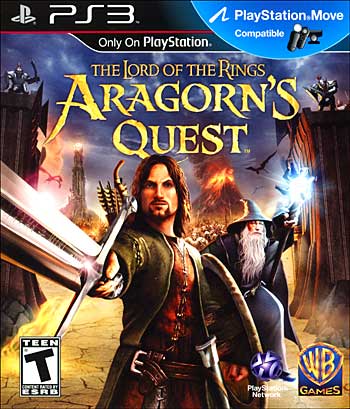