Title: Divinity II: Ego Draconis
Publisher: Atari
Platform: Xbox 360
Genre: RPG
Release Date: 12/30/2009
Overview:
You’ve battled against dragons before. Now, battle as a dragon in this RPG that harnesses the power of shapeshifting to deliver a legendary experience! Return to the world of Rivellon, where the Dragon Slayers hunt their sworn enemies the Dragon Knights, and the Black Ring waits to unleash a new evil. As a Dragon Slayer who inherits the powers of a dying Dragon Knight, you’ll fight as both a human and a dragon on a dynamic series of quests. With the ability to teleport to your Battle Tower stronghold at any moment or build a creature from body parts collected in battle, your dragon powers are just the beginning. 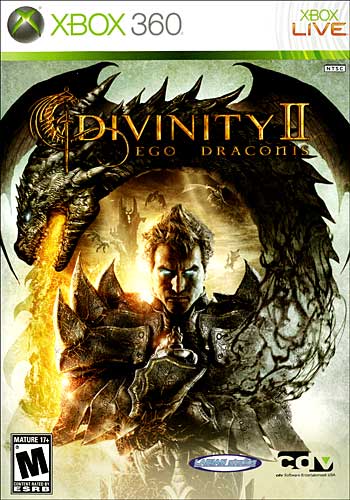