Title: Swashbucklers: Blue vs. Grey
Publisher: Atari
Platform: PlayStation 2
Genre: RPG
Release Date: 11/15/2007
Overview:
The American Civil War was the last era of the Privateer – the ocean-faring pirate. The Confederacy gave out licenses to those with civilian vessels willing to run the Union blockade, making smuggling profitable, if very risky. Take command of your own ship as Abraham Gray, a captain with dreams of glory. Sail freely among the 19 different ports in the game, up and down the Eastern Seaboard of the United States and the North Caribbean, some free, some blockaded. Raid cargo ships, fight the warships – including the fearsome ironclad – and complete quests as you decide whether to be a Union spy or a Confederate raider. Experience great on-foot action as well, as you battle dozens of different enemies and bosses. 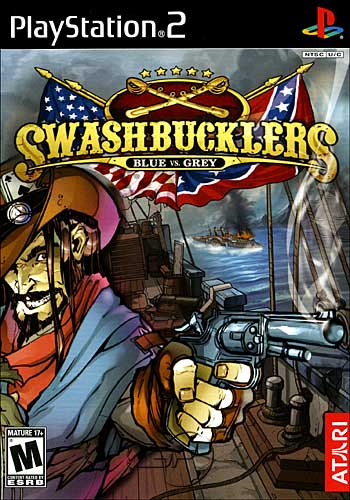