Title: TRINITY: Souls of Zill O’ll
Publisher: Koei
Platform: PS3
Genre: RPG
Release Date: 2/9/2011
Overview:
Three characters. Three distinct talents. One intertwined destiny. Lead a party of three powerful adventurers in this action-packed RPG. TRINITY: Souls of Zill O’ll is set in a massive world and built around team-based play. Explore dungeons, fields, and towns as you collect items, battle mythical beasts, and defeat an evil king. Alternate between characters in your party during battle, using the talents of a wizard, a warrior, and an assassin to defeat foes. The environment will play a large role throughout the game. Your attacks and spells can reshape your surroundings, altering the course of battles and revealing hidden paths that lead you deeper into the adventure. 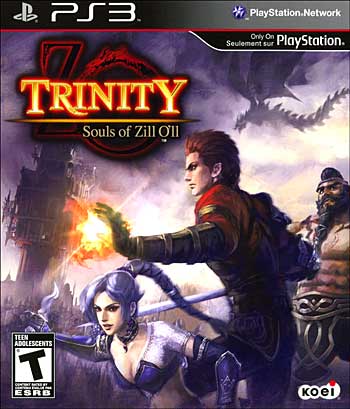