Title: Star Wars Battlefront: Elite Squadron
Publisher: LucasArts
Platform: PSP
Genre: Action Adventure
Release Date: 11/2/2009
Overview:
This war for the galaxy is so big, you won’t believe they fit it on a handheld! Battle on all fronts in a massive single-player campaign that spans the entire Star Wars saga. You’ll play as X2, a force-sensitive clone built from the DNA of a Jedi Master. Battle the Empire and your clone brother who has embraced the Dark Side. Fight as your favorite Star Wars characters, use your favorite vehicles, and visit trademark locations from the movies. Each Battlefront is intertwined, with your actions on one front affecting outcomes on another. And if that’s not big enough for you, fight giant multiplayer combat scenarios built for up to 16. 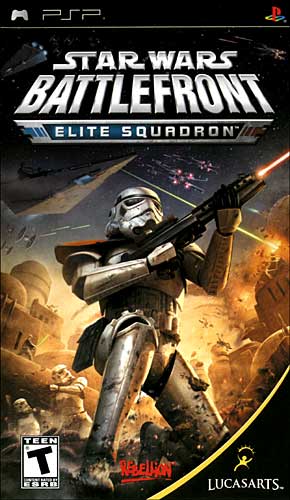