Title: Guitar Hero 5
Publisher: Activision
Platform: PlayStation 2
Genre: Music/Dance
Release Date: 8/31/2009
Overview:
Guitar Hero delivers another chart-topping performance with new modes, new music, and more customization than ever before. For the first time, set your band’s lineup anyway you like by adding or removing guitarists, drummers, bassists, and vocalists. New Party Play Mode lets players jump in, tap out, or alter their difficulty level while the jam seamlessly rolls on. RockFest sends you into rock ‘n’ roll battles against other players in multiple musical showdowns. And, if all you want to do is shut up and rock, you’ve got an impressive new selection of master tracks from artists like The White Stripes, Tom Petty, Johnny Cash, and Kings of Leon just waiting for you to shred. 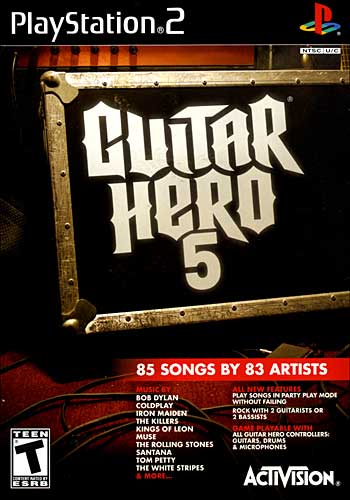