Title: A Boy and His Blob
Publisher: Majesco
Platform: Wii
Genre: Action Adventure
Release Date: 10/14/2009
Overview:
Some superpowers are triggered by special rings. Some by kryptonite. Some by radioactive bugs. Too bad for those guys! In A Boy and His Blob, the hero’s superpowers are triggered by jellybeans! This remake of a classic NES platformer follows the story of a boy and his jellybean-eating blob and their adventures trying to save the far-away land of Blobolonia. Team up and fight through 40 side-scrolling monster-filled levels. When you’re in a jam, feed your Blob a jellybean to turn him into a helpful tool. Feed him the Licorice Ladder, Tangerine Trampoline, Carmel Cannon, and more to fuel his – and your – taste for adventure. 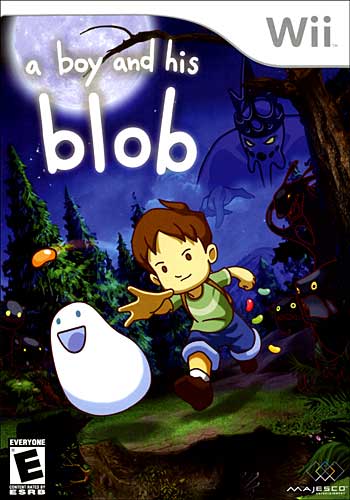