Title: Planet 51
Publisher: Sega
Platform: Xbox 360
Genre: Action Adventure
Release Date: 11/17/2009
Overview:
In Planet 51, a world braces for an alien invasion. Only this time, we’re the ones doing the invading! Based on the animated movie that turns scif-fi films upside down, Planet 51 sends a human astronaut crashing down on a world full of little green men. Stay one step ahead of the Planet 51 police and military as you help astronaut Chuck Baker find his ship and find his way back home. Drive everything from hover-cars to bikes to lawnmowers to complete missions in crazy racing chases. Make new friends, meet characters from the movie, and explore a world not unlike our own in a variety of missions, mini-games, and multiplayer modes. 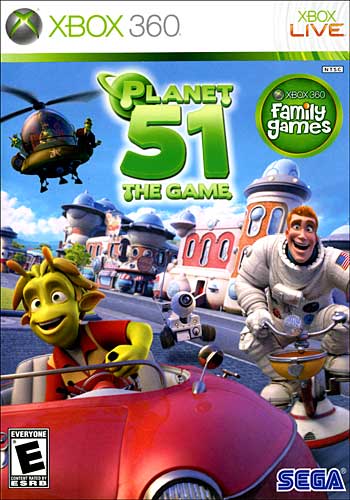