Title: Monsters vs. Aliens
Publisher: Activision
Platform: Xbox 360
Genre: Family/Party
Release Date: 3/24/2009
Overview:
Classic 1950s sci-fi movies always showed humans battling bizarre monsters. Now, it’s up to the monsters to save the day in this game based on the Monsters vs. Aliens movie. When aliens attack earth, it’s monsters who roar to the rescue. Play as three of your favorite movie monsters and use their unique powers to defend earth. Bash and bounce as the prehistoric Missing Link. Ooze through cracks, stick to the ceiling, and absorb and spit out enemies as the brainless blob B.O.B. And tower over everything as the 49-foot, 11-inch woman Ginormica. You’ll battle across 20 levels from the movie and beyond. A friend can join anytime as Dr. Cockroach, Ph.D. in co-op play. 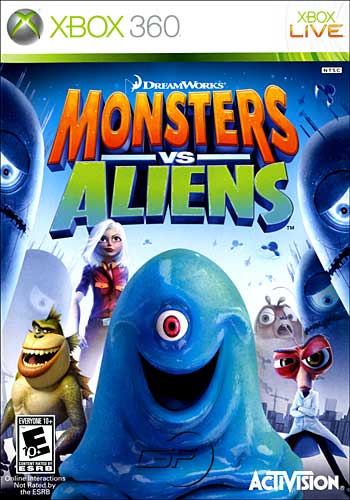