Title: Battlestations: Pacific
Publisher: Eidos
Platform: Xbox 360
Genre: Strategy/Simulation
Release Date: 5/14/2009
Overview:
Man your battlestations again for two campaigns: one that retraces history, and one that reinvents it. This sequel to Battlestations: Midway is more epic and more explosive than the original. Fight 28 historic WW2 battles on both sides of the battle for the Pacific. Experience the American campaign from Midway to Iwo Jima, Okinawa, and beyond, or begin the Japanese “what-if” campaign at Pearl Harbor. Strategically plan your maneuvers in a giant open world, then launch large-scale assaults using air, sea, and undersea forces. Dive into the action and switch to any plane, ship, or sub anytime. Up to eight players and 100 units collide in massive multiplayer modes. 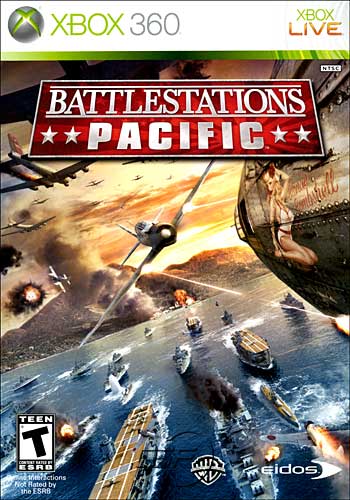