Title: LEGO Star Wars II: The Original Trilogy
Publisher: LucasArts
Platform: Xbox
Genre: Family/Party
Release Date: 9/11/2006
Overview:
The war between the Galactic Empire and Rebel Alliance has left a galaxy far, far away in pieces! Thankfully, with LEGOs, rebuilding is easy! Experience the magic of the original Star Wars trilogy as you play through Star Wars, The Empire Strikes Back, and Return of the Jedi, all re-created with LEGO bricks! Play as over 50 favorite characters. In a LEGO Star Wars first, you can even get out of vehicles and ride creatures! Other new features include a game save from the first LEGO Star Wars that doubles the amount of characters, adjustable difficulty, the ability to switch ships anytime in Free Play Mode, and more! 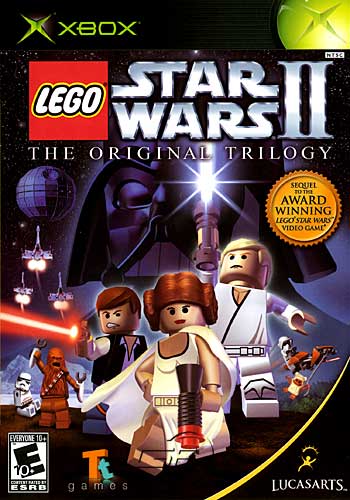