Title: Marc Ecko’s Getting Up: Contents Under Pressure
Publisher: Atari
Platform: Xbox
Genre: Action Adventure
Release Date: 2/15/2006
Overview:
Make your mark on the world. This story-based adventure captures the passion that drives graffiti artists to tag their surroundings. In the world of graffiti artists, “getting up” means getting your tag on a wall, subway, or high spot. Over 50 of the world’s best-known graffiti artists have lent their tags and talents to the game, which features an all-star cast from hip-hop and Hollywood. Six legends among those urban guerilla artists – Cope2, FUTURA, OBEY: Shepard Fairey, Smith, Seen, and T-kid – will mentor the game’s rebellious lead character, Trane (played by hip-hop star Talib Kweli). Learn the secrets behind stencils, wheat pasting, and burners as you become an all-city king. 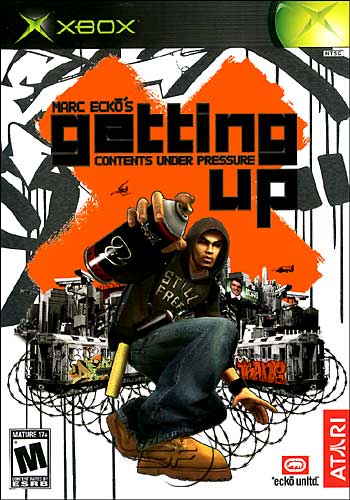