Title: Without Warning
Publisher: Capcom
Platform: Xbox
Genre: Action Adventure
Release Date: 11/2/2005
Overview:
All is running smoothly at the Peterson-Daniels Chemical Facility, until, Without Warning…Terrorists seize the plant, threatening to blow it up and kill millions. Play as six characters, each with a different goal. Three are covert-ops forces infiltrating the plant: a squad leader, bomb specialist, and a newbie on his first mission. On the civilian side, there’s an overlooked security guard out rescue his co-workers. A cameraman wants to capture the events on video. A secretary just wants to reach safety. This third-person shooter unfolds over a finite 12-hour period. Control any character for minutes or hours and see what awaits in the parallel storylines. 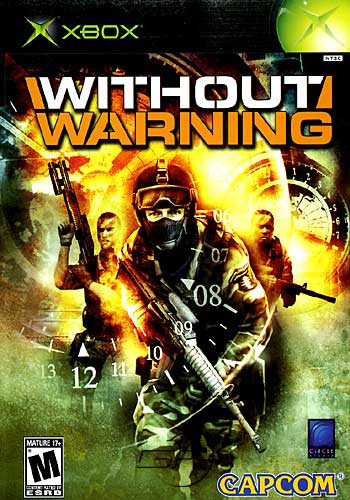