Title: Shattered Union
Publisher: Take Two
Platform: Xbox
Genre: Strategy/Simulation
Release Date: 10/18/2005
Overview:
The United States is splintered into warring nation-states and the country’s fate is in your hands! Lead one of seven factions – the California Commonwealth, Pacifica, the Republic of Texas, the Great Plains Federation, The Confederacy, the New England Alliance, or a European peacekeeping force – in the struggle to reunite America. This tactical 3D war game unfolds with a birds-eye view. Plot turn-based moves, then see results in fiery animations. The path your non-linear mission takes adjusts based on your choices. Call up the National Guard, strike a deal with the Russians – it’s all part of the battle to become the next great patriot. Multiplayer options are available both on and offline. 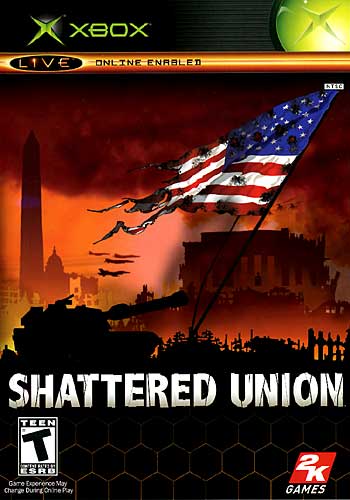