Title: NBA Jam
Publisher: Electronic Arts
Platform: Wii
Genre: Sports
Release Date: 10/4/2010
Overview:
High flying, rim-rocking, NBA action is back with the return of NBA Jam! The arcade classic is heating up for Wii, bringing back basketball at its showboating best. Play as some of the NBA’s biggest stars in two-on-two dream matchups where a plain old two-handed dunk will get you booed off the court. Soar above the shot clock for alley-oops, windmills, 360s, and more. Hoop it up in two-on-two games, challenge modes like Backboard Smash, and one-on-one matchups against NBA legends. Gameplay gets an update with help from motion-capture technology, and the faces of your favorite NBA players have been re-created with photo-realistic accuracy. 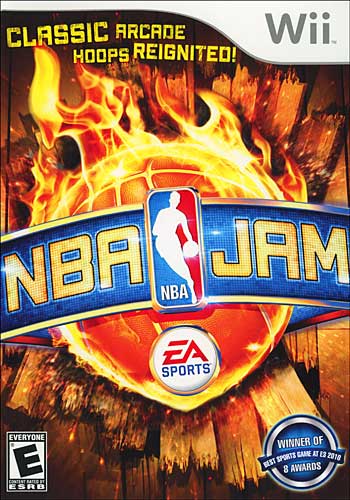