Title: Vampire Legends: Power of Three
Publisher: THQ
Platform: Nintendo DS
Genre: Action Adventure
Release Date: 6/28/2010
Overview:
Who needs garlic and crosses when you have magical powers? Fight vampires and their evil powers with special powers of your own in Vampire Legends: Power of Three. The vampire Gorazul has terrorized the town of Ashbury for years. Now, three siblings have entered the battle against the forces of darkness. Explore eight chilling locations on a quest to find six amulets that can defeat the undead evil. Use your magical powers to harness the elements as you play with fire, attack with water, and destroy with ice. Four mini-games add to the adventure by challenging you to brew potions, take flight, and more. 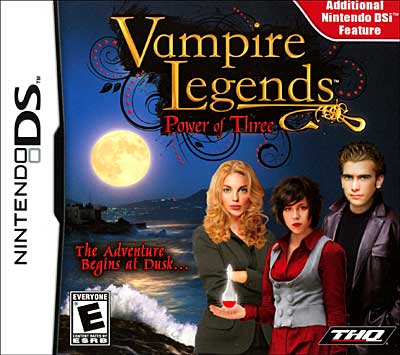